Want More Success? Have Some Pie!

I’ve been “in the cave” for the past several weeks, working on the final phases of a major new release from my company. Out of necessity, this means that the time I spend communicating with the rest of the world has been at a minimum.

During these periods, there are two things I refuse to sacrifice: my morning and evening “vision” sessions, and my time spent with friends and family. In fact, my parents have been in town for the past week… which partly explains the topic of this post.

Of course, what I’m doing day-to-day has a huge effect on what I’m thinking (pretty-much the opposite of The Secret — we’ll get to that momentarily). As fate would have it, I’ve also been re-reading a lot of Bucky Fuller’s writing. So the pump is primed for a post about:

Work Ethic… or “It’s Not Easy Makin’ the Green!” “Work Ethic” is the phrase I grew up with. I’m sure there’s some fancy new term for it these days, maybe even a TLA (Three Letter Acronym). But it still boils down to the same sentiment:

“Do what’s necessary, even if you don’t want to.”

In my experience, both in my own life and in the successful people around me, this is the deciding factor in your level of success.

Everyone wants to have “the good life,” but people often forget the path to that life is paved with diligence.

“The Secret” is Hard Work

I’m assuming you’re familiar with The Secret franchise?
(Yes I chose the word “franchise” on purpose… it is a business, after all!)

Even though I’m a trained scientist and natural skeptic, I believe a lot of the philosophy behind The Secret. I’ve just seen it play out all too often. People who are typically happy and “positive” (my wife and I included) tend to be able to manifest anything they want. The ones filled with doubt, worry and fear constantly have a much tougher go of life.

I always constrain The Secret with a phrase I learned in my symbolic logic class:

“Necessary but not sufficient”

How you think is just the starting point.

How many people do you know who have a “million dollar idea?”

I’m guessing almost everyone you know, if you asked them, has had at least one idea that could make a lot of money.

How many actual millionaires do you know?

[Hint: if you do know people who have achieved a level of success you aspire to, spend more time with them!]

Every ounce of success I’ve achieved has come about through a product of two disciplines:

Most people forget that hard work is a requirement. 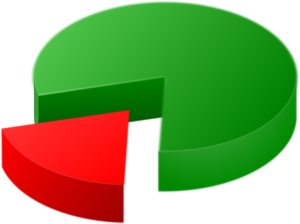 Sometimes I think I would be completely lost if it weren’t for my friend Eugene Burger. The following concept is his; I’ve just given it a practical spin.

“Everyone has the same pie to slice — it’s called 24 hours.”

If you want to know where you are, and where you’re going, do the following exercise:

[If you’re unfamiliar with spreadsheets, here’s a quick video on how to do this with Google Sheets].

I’m sure you’ve heard the phrase:

“What you water, grows.”

It’s that simple. Look at how you spend your time. That will tell you how much “success” you’ll have in each area of your life. Want a better relationship? Spend more time with your partner. Exhausted? Spend more time resting (not necessarily sleeping). Want to lose weight? Spend less time eating (or at least eat less food)!

By now, some of you may be thinking that I’m suggesting all of your success will come from your own efforts. Not true, my friends!

This model can be applied to success at any level. The only thing that changes as you grow beyond your own capacity is how you apply the model.

To grow into that Big Vision, you’re going to need help. That help tends to fall into two categories:

You’re still going to apply the pie model, but instead of your own effort, it will be the effort of the systems or people working for you. For instance, when you’re choosing systems to automate parts of your life or business, the question you should be asking is “How many hours a day is this saving me, or my staff?”

Bonus: How to Hire the Right People

I’ll go into this in a lot more detail in a future post. For now, simply consider these two facts:

When you’re hiring, focus on attitude and work ethic.

Everything else is just training.