“I am a great believer in luck. The harder I work, the more of it I seem to have.”
— Coleman Cox 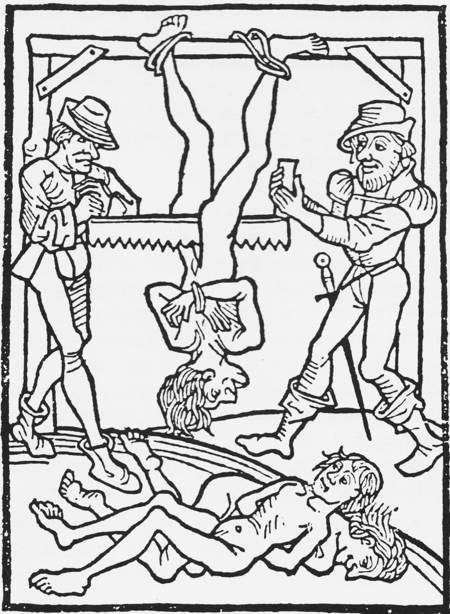 A German woodcut depicting The Saw, published in 1474

2014 was a year of transition for most of the people in my life, myself included.  We’re not talking getting a new job or moving down the street. These were major changes in life’s direction.

To make room for new things, old habits and activities have to be sent to the chopping block (execute: to put to death). I learned the hard way this last year that the path to success is dependent on the level of success you’re trying to achieve. What gets us to one level isn’t sufficient to get us to the next.

Change isn’t easy. We work hard to achieve stability in our lives. The idea of quitting behaviors that allowed us to achieve that stability is terrifying. But stability is always temporary. You can either wait for the world around you to change, and then try to catch up, or you can choose to take control of the future and affect the change yourself.

For those who have chosen to walk a new path, 2015 will also be about execution, but following the second definition (execute: to carry out fully, put completely into effect; to do what is required; to make or produce).

The good news is that success is achieved primarily through simple, mundane tasks. Unfortunately, that’s also the bad news. Since we don’t get any instant gratification out of these tasks, we tend to forget how important they are and let them slip. Success can be glamorous, but the path to get there is filled with pretty boring stuff.

[If you want to dig deeper into this idea, I highly suggest The Slight Edge: Turning Simple Disciplines into Massive Success and Happiness

by Jeff Olson. Thank You to my dear friend, corporate speaker Heather Rogers, for sending me a copy.]

For me, 2015 is about giving back and writing in a new language. Over the past 25 years I’ve penned tens of thousands of “sentences” in Assembly, Fortran, C, C++, Java, Perl and PHP (programming languages for you non-techies).

After building and operating a successful one-person company, I’m ready to start teaching others how to do it. I’ll be focusing a lot on automation. To me, the whole point of software is to intelligently automate those mundane tasks that lead to success. This frees us up to dream even bigger dreams and allow more time for the things that are really important (friends, family, health, travel, _________ [fill in your own]).